Automate your tests with DOT Verifier!

What is more difficult to compare?

How to maintain test scenarios?

Scenarios must be maintained with the same rhythm as the applications

What is more volatile than a test data?

Nothing is more difficult to reinitialize than test data

How can developers be motivated to maintain test scenarios
when they are already responsible for maintaining the applications themselves?

Do you need to guarantee the non-regression of your entire system?

Automate your tests with DOT Verifier!

DOT Verifier is a test-scenario recording robot that automates your functional, non-regression testing activity. Once scenarios are recorded, they can be replayed automatically, in any order you wish, highlighting differences at any level: the user interface, the database and the spool files. The results can be exploited as PDF comparison reports. Thanks to the high-level automation provided by this solution, testers are 100% autonomous and all of the problems concerning test data are covered.

Open and extensible, works with what you already have

It’s easy for end-users to record test scenarios directly from the interface they usually use. The DOT Verifier tool automatically records:

Note that it is possible to return to a database’s original state after recording a scenario, and that each scenario is independent from the others. Because of this, they can be replayed in any order.

For each new application version there is a corresponding replay that contains the related scenarios which will automatically be made available for this new version. PDF reports are generated once the replay has been performed.

For most test scenario tools, it is very difficult to update an existing scenario after modifications in the programs. Often, it requires complete re-entry of the scenario or script modification.

DOT Verifier functionalities will help you to facilitate this task: 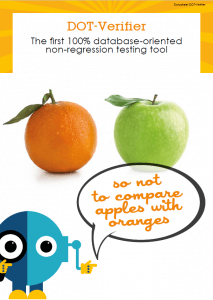 Find out more about DOT Verifier by downloading the Datasheet!